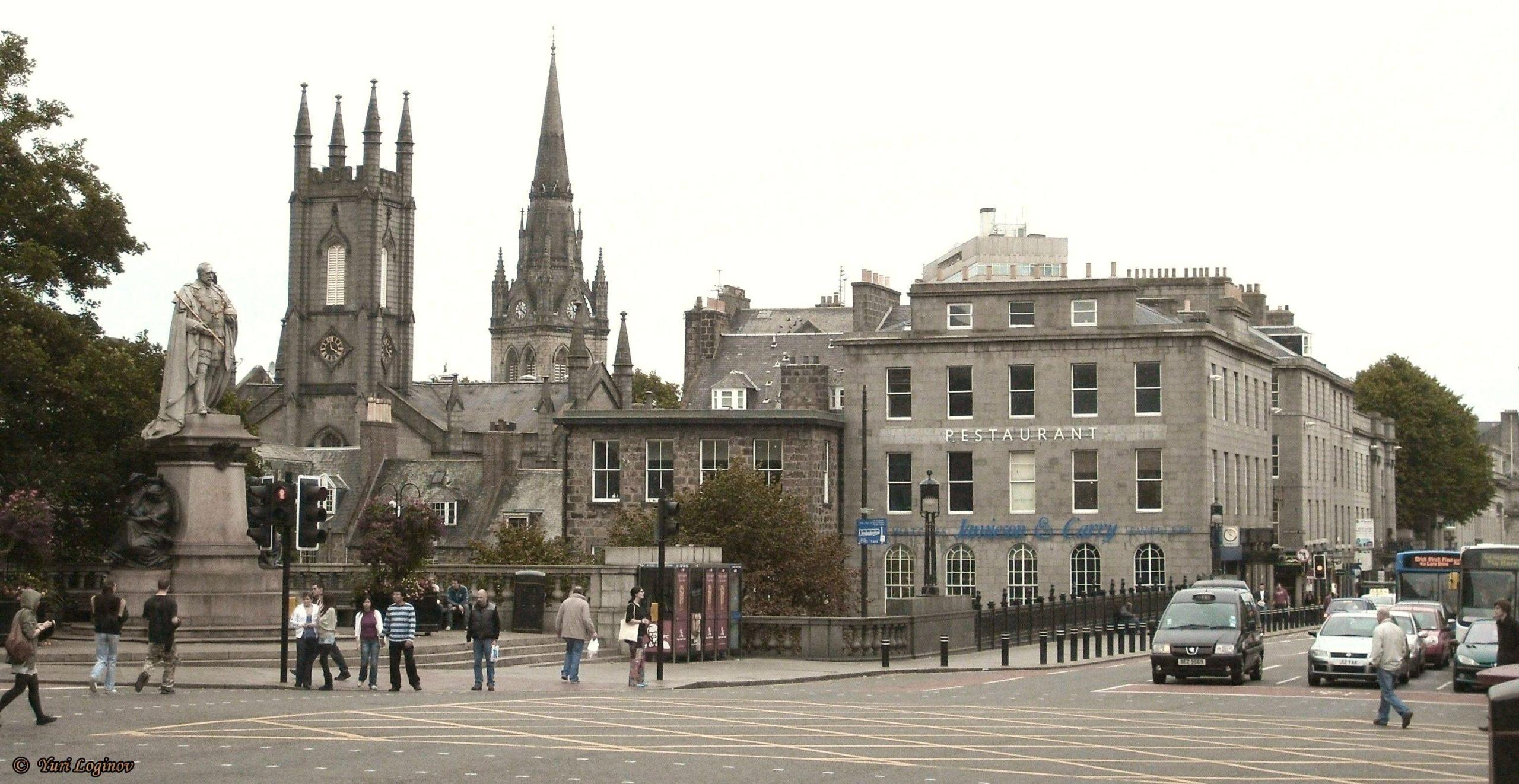 WIG’s new wireless infrastructure uses a network of small cells attached to lamp-posts and traffic lights across Aberdeen’s city centre.   The small cells are connected back to a nearby hub using WIG’s newly constructed fibre links which enable new network models that deliver faster and higher capacity mobile services.  The infrastructure was designed, deployed and funded by WIG and is built to support all mobile operators as well as other wireless networks.

O2 is the first mobile operator to launch its services using the infrastructure and has played a key role in its development, deploying C-RAN technology which is new to the UK. O2 will initially run advanced 4G services but the fibre-connected small cells pave the way for 5G by enabling even faster speeds, lower latency and better coordination between cells than traditional network methods.  Better coordination and lower latency is essential for the advancement of future applications such as driverless vehicles.

The first wave of small cell deployment in Aberdeen has now been switched on in key parts of the city and the network passes busy public venues such as the central railway station, Aberdeen University and Aberdeen FC’s stadium. The network is expected to extend across the rest of the city in the years ahead.

“Every major city in the UK is thinking about small cells but in the race to be 5G ready, Aberdeen’s city council had the vision to unlock industry investment in the enabling wireless infrastructure needed to transform mobile connectivity.  Aberdeen City Council’s close collaboration in the planning and deployment of our infrastructure has been critical to the project’s success.”

“Our Aberdeen investment marks a step change in WIG’s fibre ambitions.  There is an urgent need for more fibre infrastructure to support the UK’s wireless sector and WIG plans to address this by constructing bespoke new fibre networks for the deployment of small cells and their integration with existing mobile backhaul networks.”

“We are delighted to be working with WIG on this project. Building digital connectivity into our economic future now is essential to ensuring that Scotland, and the rest of the UK, become some of the best-connected countries in the world. The small cell network in Aberdeen represents a successful collaboration between council, infrastructure provider and mobile network operator.  It is a crucial step along the path to making the UK 5G ready.”

“We have a clear vision of enabling the best mobile and wireless connectivity across Aberdeen to stimulate local economic growth.  Many departments across the council have engaged closely with WIG to develop the processes needed to make this happen.   We are delighted with the deployment of this state of the art network by WIG, with O2 as the first mobile network to come on board”.

Delivering greater wireless speeds, more bandwidth and the move towards 5G requires a new layer of small cell network infrastructure to be deployed along the UK’s city streets.  Small cells use lower power transmitters placed closer to street level to deliver extra capacity where it’s needed.  The UK will need more than one hundred thousand small cells over the next decade in order to keep pace with demand and to deliver 5G technology and city councils have a vital role to play in enabling their deployment on a cost-effective basis.   Aberdeen City Council focused its concession model on unlocking investment in infrastructure that would serve the city into the future, and WIG was selected as its wireless infrastructure partner following a competitive tender process.  WIG expects to invest in excess of £10m in new fibre and associated infrastructure into Aberdeen over the concession.

Following its appointment WIG has worked closely with different departments in Aberdeen City Council including planning, traffic, legal, intelligent transport systems and street-lighting to ensure a streamlined set of processes for deployment and operation of small cells.  WIG has also rented duct from Aberdeen City council to enable it to deploy its own fibre – this was essential given that access to BT Openreach duct is currently denied to operators such as WIG.

O2 engaged with WIG at an early stage in the process and as network anchor has played a key role in shaping the network.

WIG’s infrastructure solution is based on a significant deployment of fibre with each lamp-post or traffic light being connected to multiple dark fibres.  This investment enables new types of mobile architecture to be deployed including centralised RAN (C-RAN).  C-RAN is new to the UK but is being extensively deployed in other markets such as the US and it allows for more efficient use and better coordination of network resources leading to lower latency and faster speeds for end user devices.   With multiple fibres to every node, WIG’s infrastructure is truly 5G-ready.

WIG is an independent communications infrastructure provider head-quartered in Bellshill, Scotland. The Company builds and operates communication towers (masts) in rural and suburban areas together with fibre based networks to improve mobile coverage in large buildings and on city streets.  The company is fully independent of any network operator and invests in higher capacity infrastructure that is made available to all mobile and wireless networks to use on an open and shared basis. Following its launch over ten years ago, WIG has invested in over 2,000 shared communications assets across the UK.  The company recently expanded into the Netherlands and Ireland.

WIG works in partnership with mobile and wireless network operators, utilities, public bodies and large real estate owners to enable connectivity in challenging locations including across transport and utility infrastructure, rural areas, inside large buildings and public venues and on city streets.

In 2016, WIG announced a major investment from 3i infrastructure plc, joining existing investors Barings LLC (the investment arm of Mass Mutual with $275 billion under management) to underpin WIG’s plans to invest £1 billion in UK infrastructure.

O2 is the commercial brand of Telefónica UK Limited and is the mobile network operator with the highest customer satisfaction in the U.K according to Ofcom. With over 25 million customers, O2 runs 2G, 3G and 4G networks across the UK, as well as operating its nationwide O2 Wifi service. O2 has over 450 retail stores and sponsors The O2, O2 Academy venues and England Rugby. Read more about O2 at o2.co.uk/news.

Aberdeen City Council provides local government services to 115,080 households and 8,651 businesses. The authority serves a population of 229,000 directly and on an operational basis the wider North-east population of 489,000. The Council employs approximately 8,600 staff.

Aberdeen is a thriving, cosmopolitan port in the North-east of Scotland. Traditional industries such as fishing and farming still flourish in and around the city, which is home to two leading universities.  The city’s economy continues to be underpinned by the oil and gas sector, with Aberdeen recognised globally as a centre of excellence and expertise in the energy industry.

Accelerate Aberdeen is an ambitious programme of work to provide Aberdeen with the world class infrastructure and business development platforms to secure the long term vibrancy of the city’s economy.  As part of this programme, Aberdeen City Council has a Wireless Concession with Wireless Infrastructure Group (WIG) enabling the deployment of small cells within the city centre and beyond by allowing access to the Council’s street furniture and buildings.  Aberdeen City Region Deal area has also been selected as one of the pilot areas to deliver full fibre connection vouchers to meet the cost of fibre to the premises roll out in the region.

O2 customers can now take advantage of enhanced mobile connectivity in public spaces such as stadiums, shopping centres, hotels and conference centres as a result of a multi-million pound network collaboration between O2 and Wireless Infrastructure Group (WIG).

Sports venues such as Liverpool’s 54,000 capacity Anfield Stadium and Lord’s cricket ground have already benefitted from the installation of new mobile infrastructure operated by WIG to improve coverage and capacity for customers.

Major UK shopping centres benefitting from new or upgraded infrastructure include the Bentall Centre in Kingston, Bluewater in Kent, Meadowhall in Sheffield, and a host of INTU properties including Milton Keynes, Eldon Square, Metrocentre, Lakeside, Derby, Watford, Victoria and Uxbridge, as well as the iconic Trafford Centre which analysis of crowd-sourced data has shown a 50% improvement in network performance*.

O2 has also deployed mobile services using new WIG infrastructure across hotels and other prestigious real estate developments including: the world-renowned Savoy Hotel, The Ned and Pullman hotels, as well as King’s Cross, Canary Wharf and the Leadenhall Building (tallest in the City of London). Another high footfall venue that has benefitted from this collaboration between O2 and WIG is ExCel London, one of the largest UK conference centres.

The investment comes as O2 gets its network 5G-ready in preparation ahead of launch later this year.

Brendan O’Reilly, Chief Technology Officer, O2 said: “While we look ahead to 5G we also continue to focus on our existing network capability. We strive to deliver a great network experience to all our customers, including some of the UK’s busiest locations where network demand is at its peak. Our multi-million pound investment with our partners at WIG should provide O2 customers with even better connectivity in the places they love to visit.”

O2 currently offers 4G in almost 19,000 cities, towns and villages across the UK and spends the equivalent of £2 million a day on strengthening its network and increasing its reach.

The operator was recently awarded uSwitch’s 2019 award for Best Network Coverage, as voted by the public.

Sign-up to receive our news and events updates (we will never share your details with any third parties).

We use cookies on our website to give you the most relevant experience by remembering your preferences and repeat visits. By clicking “Accept”, you consent to the use of ALL the cookies, including analytics. However you may visit Cookie Settings to provide a controlled consent.
Cookie settingsACCEPT
Manage consent

This website uses cookies to improve your experience while you navigate through the website. Out of these cookies, the cookies that are categorized as necessary are stored on your browser as they are essential for the working of basic functionalities of the website. We also use third-party cookies that help us analyze and understand how you use this website. These cookies will be stored in your browser only with your consent. You also have the option to opt-out of these cookies. But opting out of some of these cookies may have an effect on your browsing experience.
Necessary Always Enabled
Necessary cookies are absolutely essential for the website to function properly. These cookies ensure basic functionalities and security features of the website, anonymously.
Functional
Functional cookies help to perform certain functionalities like sharing the content of the website on social media platforms, collect feedbacks, and other third-party features.
Performance
Performance cookies are used to understand and analyze the key performance indexes of the website which helps in delivering a better user experience for the visitors.
Analytics
Analytical cookies are used to understand how visitors interact with the website. These cookies help provide information on metrics the number of visitors, bounce rate, traffic source, etc.
Advertisement
Advertisement cookies are used to provide visitors with relevant ads and marketing campaigns. These cookies track visitors across websites and collect information to provide customized ads.
Others
Other uncategorized cookies are those that are being analyzed and have not been classified into a category as yet.
Save & Accept
Powered by